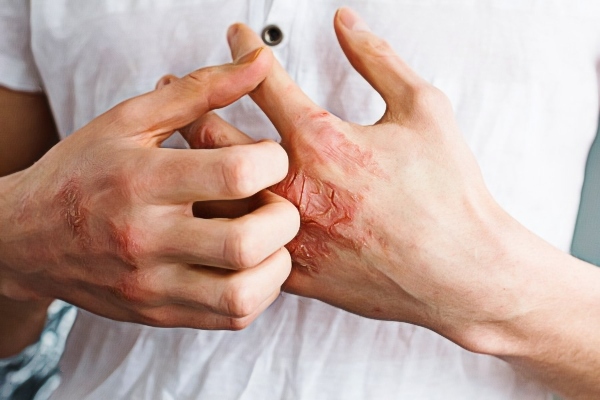 Methamphetamine, known popularly as its street name meth, is a highly-addictive drug that is either smoked, snorted or sometimes even injected to achieve pleasurable and euphoric sensations. Its high abuse potential has at least 5.4% of people over the age of twelve indulging in the substance in their lifetime.

Understanding its characteristics and how best to treat the symptom can give you a better understanding of its dangers and avoid addiction.

Meth sores are open lesions  that are anywhere around the body when an individual regularly abuses methamphetamine. If you’ve ever wondered what causes meth sores, the answer may vary according to the length of use, underlying health conditions, and how rapidly one seeks treatment.

Typically, meth users will experience a wealth of delusions. These hallucinations might include bugs crawling under the skin that cause picking and scratching to the point of bleeding. Because meth stunts blood circulation, it hinders the body’s ability to fight off infections. Thus, a combination of dryness, poor hygiene habits, and acne breakouts can exacerbate meth sores.

Meth sores are capable of appearing anywhere on the skin. Ordinarily, they’ll be most noticeable on the arm, where users will inject the substance. Even in hot temperatures, users will don long-sleeved shirts and pants to conceal the sores, which may suffocate the wounds.

In terms of meth face, sores will appear in large, open gashes and mostly around the mouth. Users looking for a quicker, more effective hit might smoke the crystalline drug with a hot pipe, causing burns around the lips. Hot smoke can occasionally cause meth tongue sores.

If you spot rashes, blisters, dots, acne, burns, bites, or scabs on the face, mouth, and body, seek treatment as soon as possible.

There are both physical and also psychological effects that are critical players in the emergence of meth sores. Coupled with poor hygiene and unhealthy lifestyle , meth sores are doomed to worsen.

The implications of meth sores include:

Toxins regularly entering and exiting the pores will cause acute and cystic acne around the face and body. As meth constricts the blood vessels, reduced blood flow will hamper your ability to heal.

As we mentioned above, meth users will regularly pick and scratch at imaginary bugs that result in open sores. If left untreated, these wounds become badly infected.  Officially, skin-picking due to meth addiction is known as formication. Symptoms include meth-induced anxiety and compulsions.

Rashes and sores aren’t the only skin problems affiliated with meth use. Some users experience hyperhidrosis or increased sweating regardless of the weather. This increased sweating can also lead to body odor, as drug use increases the number of chemicals emanated from the skin.

The Effects of Meth

Meth produces extreme physical and emotional effects on its user. Initially, they will experience a loss of appetite and weight. As hygiene and dental practices falter, the teeth will begin to fall out.

Because a meth high boasts energy-boosting and mood-elevating effects, the brain links its use to a positive experience. Thus, users become psychologically dependent on the substance as dopamine increases.

Over time, the body begins to rely on meth to produce and maintain an average dopamine amount. Without the drug, users undergo meth withdrawals, causing them to feel physically ill, lethargic, anxious, depressed, or paranoid.

Despite their apparent similarities, dependence and addiction are not the same things. Dependence pertains to the physical state in which your body requires more of the substance to achieve desired effects.

On the other hand, addiction can occur with or without physical dependence and refers to an individual who can’t quit the habit regardless of adverse effects.

You can recognize addiction in yourself or others if:

It can be tempting to diminish the appearance of meth sores and dull painful sensations with home remedies. Though entirely possible, it’s best to seek professional rehabilitation services and treatment.

If on an outpatient program, specialists might recommend applying Vitamin E or aloe vera-enriched oils to the wounds to add moisture to the skin.

Without prompt treatment, the user is at risk of severe infection and permanent scarring. Though the best way to prevent meth sores is abstinence from the drug, other ways to treat them are:

Initial treatment for in-facility or outpatient programs will involve detoxification. The actual process will rely on the level of addiction and ultimately allow the body to acclimatize to functioning without the drug.

In the first stages of detox, patients might experience anxiety, cravings, itchiness, depression, decreased sexual pleasure, a lack of energy, paranoia, and psychosis, among other things. After 14 to 20 days of abstinence, withdrawal symptoms begin to wane.

Overcoming a meth addiction is hardly simple, what with the added stress of reducing one’s risk of relapse. The rugged appearance of meth sores can be discouraging, but addiction is curable with the right mindset and willingness to heal.